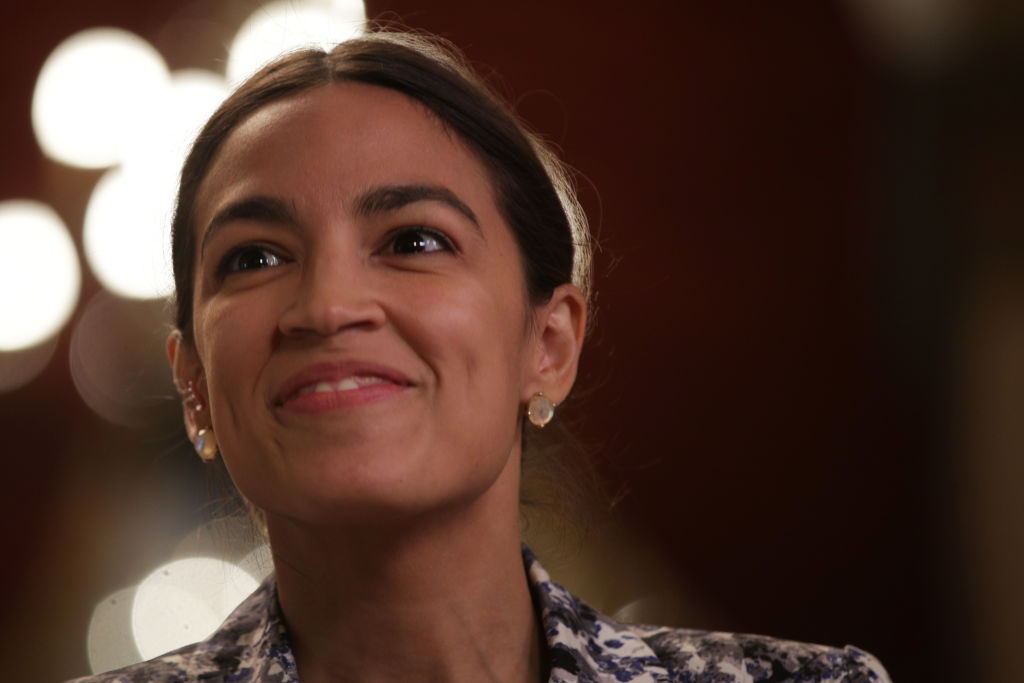 When Alexandria Ocasio-Cortez suggested raising marginal tax rates for multimillionaires to 70 percent earlier this year, the expected conservative outrage caught the airwaves. Fox News warned of the impending apocalypse and there were numerous invocations to Venezuela.

Many liberals (and even Bernie Sanders) responded by citing the high marginal tax rates of the 1950s. How could a 70 percent levy be radical, they replied when Dwight Eisenhower presided over a 91 percent levy?

It’s a cute line to troll the right, but it’s basically ahistorical.

Treating a tax hike for the rich as a restoration of Happy Days overestimates the amount of taxes rich people actually paid and implicitly overestimates an era of anti-communist military budgets whose minimal domestic spending mainly promoted racial segregation in our nation while minimizing resistance 70 percent rate would be.

Steep taxes for the super-rich would be profoundly transformative, especially when combined with higher capital gains and corporate taxes. But they will need serious class struggle to win.

Long-term tax comparisons are a challenge. The IRS has changed its definitions of “income” regularly, and the ability and propensity of the rich to hide income from tax authorities has shifted over the years. However, the rich now pay only slightly less income tax than they did in Eisenhower’s time.

Taxation of the rich peaked during World War II when the IRS reported (in 1943) that the wealthiest 0.2 percent of Americans spend 49.3 percent of their reported income on income taxes alone. This fell to just over 31 percent by 1949 and then rose briefly to 35 percent in 1950 to pay for the Korean War. In 1960, the richest Americans paid just 31 percent of their income in income taxes, despite the top official tax rate of 91 percent. With the help of tax arrears, the rich made fun of nominal interest rates.

Compare that to the last couple of decades. In 2004, after the Bush tax cuts, the richest Americans were employed with an average income tax rate of 25 percent. With the Obama tax hikes that was 26 percent – still not much below the rates of the Eisenhower years.

To be clear, the federal government collected more taxes from the rich in the 1950s. However, this was due to corporate and inheritance taxes, which corporations and the rich were less able to avoid (e.g. by reallocating assets between international subsidiaries to cut reported profits). With the advent of the neoliberal era, it was much easier for the rich to hide income of all kinds. As economists Thomas Piketty, Emmanuel Saez, and Gabriel Zucman have argued, the rise in incomes that are not legally subject to income (and especially corporate) tax is a crucial part of the trend in rising untaxed wealth among the elite.

And with regard to the tax nostalgia of the Great Depression: the rich then paid much less federal income taxes than they do today; the IRS calculated that the top 0.2 percent of Americans paid only 20 percent of their income in income tax in 1940. Indeed, New Deal programs were heavily funded by regressive excise taxes on alcohol, gasoline, and electricity, which provided more than double the federal income compared to the income tax of the time.

At least the income from the 1930s, however, went largely towards domestic spending.

The highest marginal tax rates of 91 percent of the Eisenhower years, on the other hand, paid mostly for military spending of the Cold War (and occasionally the covert Hot War) rather than for personal use. Much of Truman’s 1952 budget was still billed for the Korean War, and even JFK and LBJ were still spending half of the federal budget on military spending.

If American elites tolerated higher taxation in the 1940s and 1950s, it was mainly because they feared that fascism first and then communism – or even simple democratic victories in countries like Iran or Guatemala – would lose their long-term wealth would threaten. Funding a large-scale military presence around the world was in their financial self-interest. As business leader and publisher Henry Luce wrote in his famous article on the “American Century,” it took the support of US international strength to ensure that a “system of free enterprise” would “prevail this century.”

When the Vietnam War ended, domestic spending formed a solid majority of federal spending for the first time since the Great Depression, but it wasn’t until the end of the Cold War that military spending returned to pre-war II levels as a percentage of the budget.

When it comes to what percentage of the wealthy’s income is taxed to meet their needs, rather than just to fund the military, modern tax and budgetary policies are actually more advanced than they were during the Cold War era of the 1950s.

In the 1950s, domestic spending wasn’t just a small part of the budget – much of what was being spent funded suburban sprawl, which ultimately fueled both climate change and Jim Crow’s segregation.

Under the Federal Aid Highway Act of 1956, federal spending on freeways as a percentage of GDP rose to double what it is today, causing the first urbanization reversal in the country’s history. Largely lagging behind were black families who saw jobs on the highways out of the cities. Racism in the mortgage markets prevented them from doing these jobs or participating in suburban home ownership, which federal policy strongly encouraged by refusing to subsidize mortgages for African Americans moving to “white” neighborhoods.

Even the GI law largely left out black veterans. While many black veterans were given college opportunities, the GI Law’s funding for veterans mortgages and small business loans was essentially a white-only program. “The GI Act helped promote a long-term boom in white wealth,” writes David Callahan, “but did almost nothing to help blacks build wealth. We are still living with the effects of this exclusion today. “

Ultimately, support for higher taxation on the rich in the 1950s was bolstered by elite fears of global “communist” threats and racist appeals to white voters for increased government spending.

When the Great Society and other programs began to include those excluded from 1950s spending, it was used by the new right wing of the elite to encourage a backlash against taxation. Kevin Phillips, who devised Richard Nixon’s “Southern Strategy”, argued that the aim was to convince white voters that Democrats fund programs “like ‘welfare’ taxing many for a few”.

The core of this strategy was that white voters identify themselves not as workers or citizens, but as “taxpayers” allied with the rich. And it succeeded to some extent – although the biggest increases in spending in the 1960s and 1970s went to the new Medicare program and increases in social security benefits, which brought tremendous benefits not only to people of color but also to white families.

Given that income taxes levied on the wealthy are not much lower than they were in the 1950s, and since there is still a wide unmet need in society that progressives want to fund, the real goal is to determine the effective income tax rates for the rich increase far higher than back in the 1950s. Apart from rhetorical references to the past, we are in completely unknown waters. Progressives and socialists are deceiving themselves into pretending that raising taxes for the rich does not require intense class struggle. It wasn’t somehow won in the 1950s, then fumbled away – it never really happened.

Today we must promote taxation of the rich without the reluctant support of some sectors of the rich. Instead, we have a mobilized class of billionaires eager to distribute their political weight. Democratic donor and former Starbucks CEO Howard Schultz briefly launched an exploratory campaign for the president simply because he believed too many Democrats are talking about raising marginal tax rates.

But here’s the good news. If tax rates were indeed high for the rich in the 1950s, the public hardship and deep poverty would be incredibly depressing. Progressives can be proud that in the face of corporate-funded attacks by the New Right over the past sixty years, the country has shifted federal spending from mostly Cold War militarism to mostly domestic spending on a far more racially inclusive welfare state.

This success has not stopped growing economic inequality. But precisely because of the wealth now held by the elite, an increase in taxes for the wealthy would generate tremendous revenue for the government. Taking into account income that is normally not reported to the IRS, Piketty, Saez, and Zucman estimate that the top 0.1 percent of adults – who make an average of $ 6 million a year – collectively $ 1.4 trillion in 2014 -Dollars in wages and capital income possessed.

A modest tax increase of just 10 percent for this group could raise $ 140 billion more annually for charitable causes, and anything on the order of the AOC’s 70 percent tax on all their income could raise most, if not all, of the additional government costs for the introduction of Medicare cover for everyone or a Green New Deal. Raise effective tax rates on the greater number of those who are in the top 1 percent of taxpayers – those with an average income of $ 1.3 million a year – and we would have trillions of dollars to make those over the next decade Modernize infrastructure, build affordable housing, improve traffic and secure jobs for the unemployed.

Higher taxes are also hugely popular. Polls show that nearly 60 percent of the population support Ocasio-Cortez’s proposal for an upper 70 percent tax bracket, with post-boomers, who have no recollection of the 1950s, even more supportive of taxing the rich than boomers.

Still, we need to realize that promoting significant redistribution through high taxes on the rich is a fundamentally new political task. Praising the nominal tax rates of the 1950s may be a nice rhetorical move. But they lead us to believe that the 1 percent won’t fight like hell to keep their money – like they always have.