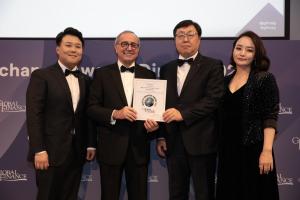 Park Chan-beom, head of the London branch of KEB Hana Bank (third from left) and Joseph D. Giarrapoto, editor and CEO of Global Finance magazine (second from left), take pictures with employees who have been voted best FX leaders The Bank. (Courtesy of KEB Hana Bank)

KEB Hana Bank announced on November 20th that it had been voted the best foreign exchange provider 2020 in Korea for the 19th consecutive year by the global finance and business magazine Global Finance on November 19th (local time) in London, UK.

Founded in New York in 1987, Global Finance Magazine has been a world-renowned finance and business magazine to which more than 50,000 CEOs and financial experts from 190 countries worldwide subscribe.

KEB Hana Bank was awarded the Korea’s Best Trade and Finance Bank Award 18 times in January and the Best Trustee Bank Award 11 times in October Bank in Korea “in name and reality.

“KEB Hana Bank’s foreign exchange capacity has again proven to be the highest in the world,” said an FI official at KEB Hana Bank. “We will not settle for the best bank in Korea and will continue to strive to strengthen our differentiated competitiveness in the world market.”

Murder, drug abuse charges for the 33-year-old Portage man after…

Is the recent UTime IPO in your portfolio?