TOKYO / DUBAI – To achieve net zero greenhouse gas emissions by 2050, the US and Europe are cutting their investments in oil and gas production. However, it is unclear whether they can promote renewable uptake fast enough to curb growth in fossil fuel demand, raising concerns about possible energy shortages.

Natural gas prices in Europe have more than tripled since the beginning of the year. As rich countries struggle for natural gas, which emits less CO2 than other fossil fuels, Russia is restricting exports to reduce its own reliance on coal-fired power.

The rising prices also reflect the higher demand for gas power generation in Europe. Unfavorable weather means that the continent’s wind turbines generate less electricity. However, given the accelerating trend towards decarbonization, it is unlikely that rising prices will turn the clock back to heavy use of coal power.

But coal prices are also rising in Asia and elsewhere because demand in emerging markets remains strong even as new coal mines open up.

Global demand for oil is projected to decrease 76% from 2020 levels by 2050, while natural gas is expected to decrease 56% and coal 89%, according to a roadmap for achieving net-zero greenhouse gas emissions by the International Energy Agency in May.

However, many experts point out that the IEA’s projections are theoretical numbers aimed at achieving net zero emissions. “Demand is unlikely to decline much in 2050,” said Yoshikazu Kobayashi, senior economist at the Institute of Energy Economics, Japan.

The other scenario, which takes into account advances in decarbonization technology, also envisages higher energy demands – an increase of 8% for oil and 16% for natural gas. The demand in emerging countries for oil for use as gasoline and for natural gas as an industrial fuel will remain stable, the institute said. Despite the expected increase in fossil fuel demand, US and European oil companies are cutting their investments in oil and gas fields. Decarbonization has become a top priority as shareholders are made aware of the issue of climate change. European researcher Rystad Energy predicts that combined exploration and development spending of the six largest US and European oil companies will increase by more than half to $ 56.8 billion in 2021 from more than $ 120 billion in 2015 will sink.

Global crude oil production will decline by 21% by 2030 and 2050 and 73% from 2020, if natural gas drills stop investing immediately, the IEA predicts, assuming net zero emissions. When countries lag behind in their decarbonization efforts, fossil fuel supply cannot keep pace with demand. 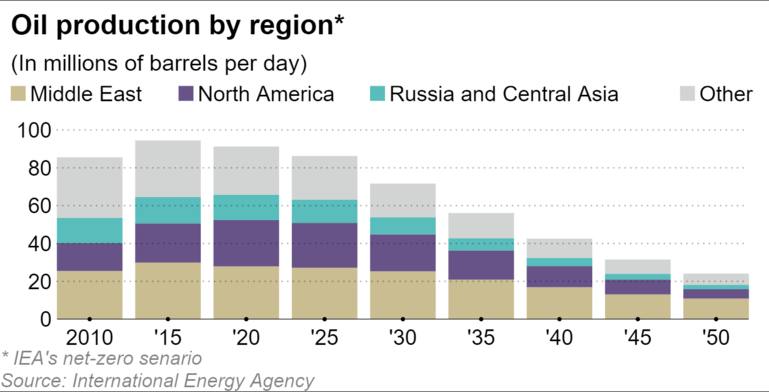 The energy-rich producers in the Middle East are aware of this possibility – and want to take advantage of it. Saudi Aramco CEO Amin Nasser said in August that the Saudi state-owned oil company is “hard at work” to expand production capacity. “Because too little is invested in [oil] is a great opportunity for us, “he said.

However, Ellen Wald of the Atlantic Council, a US think tank, warns that the world will be at “huge risk”. If the US continues to reduce oil production, “you will be left with oil from a few countries like the United Arab Emirates, Saudi Arabia and Russia. This is not just a political threat, it is an economic threat,” he said.

When a single region becomes the main source of supply, the risk of a repetition of the 1970s oil shocks also increases.

With extreme weather conditions caused by global warming wreaking havoc around the world, including floods, droughts and forest fires, carbon neutrality is a challenge the world must face in order to limit the rise in temperature and the risk of even greater damage. The difficulty is to avoid a collapse in energy supplies while at the same time facilitating the development of the technologies necessary for decarbonization.

According to Equifax, rich people can now get cybersecurity insurance

Planning is the key! Tips for a stress-free retirement

How much you should have in your retirement fund by the ages of 30,…