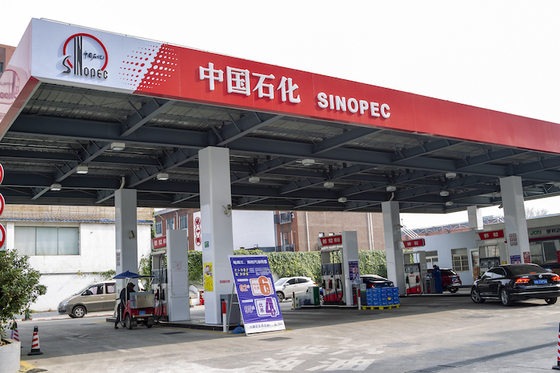 Sinopec is surging to benefit from the rebound in oil prices

China Petroleum & Chemical Corp. (600028.SH), or Sinopec, posted net income of 39 billion yuan ($ 6 billion) in the first half of 2021 thanks to a rebound in oil prices and an increase in production and sales. The state energy giant reversed a 23 billion yuan loss a year ago when oil prices plummeted and production halted amid the Covid-19 pandemic. According to an earnings report released on Monday on the Shanghai Stock Exchange, first-half sales rose 22.1% to 1.26 trillion yuan.

China’s energy storage industry is booming due to several guidelines from the National Development and Reform Commission, the National Energy Administration, and some local governments to promote development. The total storage capacity for new energy, including electrochemical storage, flywheel storage, compressed air and supercapacitor storage, increased according to Yue Fen, vice chairman of the China Energy Storage Alliance. Industry participants called for more incentives and a further revision of electricity prices in order to strengthen the market.

Several major Beijing electricity suppliers, including GD Power Development, Datang Power, Huaneng Group and Jingneng Power, sent a joint letter to the Beijing City Management Commission asking them to withdraw from their electricity purchase contracts for the fourth quarter. Coal power plants in Beijing, Tianjin and Tangshan suffered from high coal prices this year, mainly due to coal shortages, according to the press release. Meanwhile, electricity prices in Beijing fell, resulting in financial losses. The companies said they are unlikely to fulfill any power supply contracts for Beijing in the fourth quarter. Domestic coal prices remain high despite China releasing more than 10 million tons of coal from reserves in July.

Ansteel’s profit for the first half increases almost tenfold

Northeast China’s Ansteel reported net income of 5.2 billion yuan ($ 801 million) for the first half, up 936.6% year over year. Sales rose 62.49% to 72.6 billion yuan. The steel manufacturer named record production and increasing sales as well as improvements in energy efficiency. The company became the third largest steel manufacturer in the world after acquiring a 51% stake in the Bengang Group.

China Zhongwang Holdings Ltd., the world’s second largest developer and manufacturer of industrial aluminum extrusion products, suspended trading on Monday and announced that it would postpone the publication of its 2021 interim financial report. The company could face a fine after its founder Liu Zhongtian, who was charged with $ 1.8 billion in customs evasion, was convicted by a US federal jury last week.

The Chinese lithium processor Qinghai Salt Lake Industry Co. Ltd. (000792.SZ) reported net income of 2.1 billion yuan ($ 325 million) for the first half, up 53% year over year as lithium salts and potassium chloride prices rose. Sales were down 36% to 6.2 billion yuan, mainly due to a decline in trade revenue and chemical sales.

Tianqi Lithium is in the black with rising prices

Tianqi Lithium Corp. (002466.SZ), one of the world’s largest commodity producers, posted profit of 85.8 million yuan ($ 13.3 million) in the first half of the year thanks to an increase in sales and prices for the company. Lithium products amid booming demand for electric vehicle batteries. The Sichuan-based company bounced back from a loss of 697 million yuan over the same period last year, according to an earnings report released Monday on the Shenzhen Stock Exchange. In the six months to June, sales rose 25% to 2.4 billion yuan.

The regional CO2 trading market opens up to individuals

The local government of Shenyang, the capital of northeast China’s Liaoning Province, plans to launch a regional carbon trading market on September 1st. Emission certificates and certified emission reductions are traded on the market and are open to companies and private investors.

The Chinese battery manufacturer SVolt announced the installation of its cobalt-free battery pack in Great Wall Motor Co. Ltd.’s new Ora SUV. known. The battery – the world’s first such power pack that does not rely on the scarce, toxic metal – has a capacity of 82.5 kilowatt hours and should give the car a range of more than 600 kilometers.

According to a local media report, Contemporary Amperex Technology Co. Ltd. invested (300750.SH) continued in private equity funds since April. The battery maker’s investments could be aimed at fueling a resilient industrial chain for itself, said Wu Hui, general manager of the research division of the Ivy Institute of Economic Research.

Shenhua Energy (601088.SH), China’s largest state-owned coal mining company, reported net income of 26 billion yuan ($ 4 billion) for the first half, up 26% year over year. Sales rose 37% to 144 billion yuan. The company cited robust domestic coal demand. The company also forecast a reduction in coal shortages and a slight decline in coal prices in the second half of the year.

CRRC Corp. Ltd. (601766.SH), the world’s largest supplier of railway equipment, recorded a slight improvement in earnings in the first half of the year, with investments in railway assets declining. Net income increased 8% to 4 billion yuan ($ 618 million) and revenue increased 6.8% to 95.5 billion yuan. The business fields of wind power and S-Bahn contributed most to the result.

Download our app to get breaking news and read the news on the go.

Get our weekly free must-read newsletter.

You accessed an article that is only available to subscribers

Rivian wants to go to the US stock market

The head of Haier Mobile takes a localized approach for emerging…