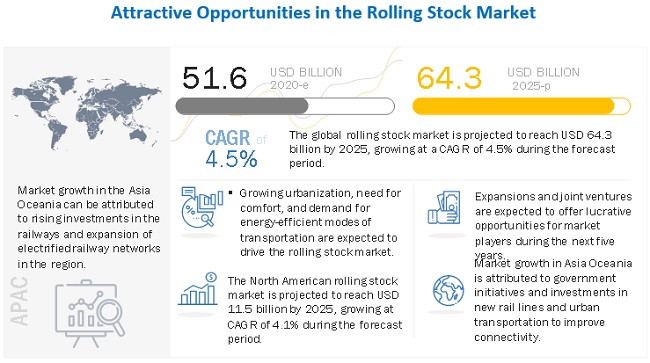 The number of technological advances in the rail vehicle market has increased rapidly. This is mainly due to the growing demand for features that ensure passenger comfort and safety. Rolling stock is also being innovated and new vehicle concepts for non-electrified railway lines are being developed in order to further reduce CO2 emissions. For example, rail vehicle manufacturers are experimenting with emission-free trains with fuel cell drives.

The conventional locomotive market is expected to grow with the highest CAGR from 2020 to 2025 and holds the largest market share in the rail vehicle market. The main advantage of the supercharged locomotives is that they deliver more power without increasing fuel costs. Countries such as China, Japan, Germany, Great Britain, France and Canada are consistently relying on improving rail traffic in order to reduce the increasing burden on roads and airways. As a result, governments have invested heavily in expanding the electrical railway infrastructure, which will boost the market for conventional electric and electric diesel locomotives. The report segments the Rolling Stock Market by product type in locomotives, suburban trains, wagons, coaches, and others. The wagon segment is expected to have the highest market share in the forecast period. Locomotives are used to pull passenger and freight cars for long-distance traffic. The increasing demand in freight transport has spurred global demand for locomotives. Passenger cars are used to transport people. With the help of couplings, several cars with trains can be put together.

In terms of application, the freight wagon market is seen as the fastest growing segment in the rail vehicle market. This is due to the tailor-made and technologically advanced wagons such as chemical and pressure tank wagons as well as car carriers and container low-loader wagons. The demand for freight cars is high in the United States, China, and Russia due to replacement needs and the growth of manufacturing in these countries. The increased mining activities in emerging countries should have a positive impact on the freight transport market. For example, more than 1,210 million tons of freight were transported by rail in India in 2019-2020. The growth in freight traffic is likely to drive the growth of freight wagons and locomotives consistently.

The rail vehicle market is expected to grow the fastest in emerging economies such as Egypt, the United Arab Emirates, India and China. The Middle East & Africa region is considered to be the fastest growing market for rail vehicles, followed by Asia-Oceania. The demand for rail vehicles in this region is triggered by the growing population of urban areas where the existing transport infrastructure is insufficient. The expansion of this network is intended to stimulate the demand for new vehicles. Many companies such as CRRC, Bombardier and Alstom are expanding their presence and product offerings in a market with high growth potential in order to gain a foothold in the rolling stock market.