How much capital does an independent mortgage lender need 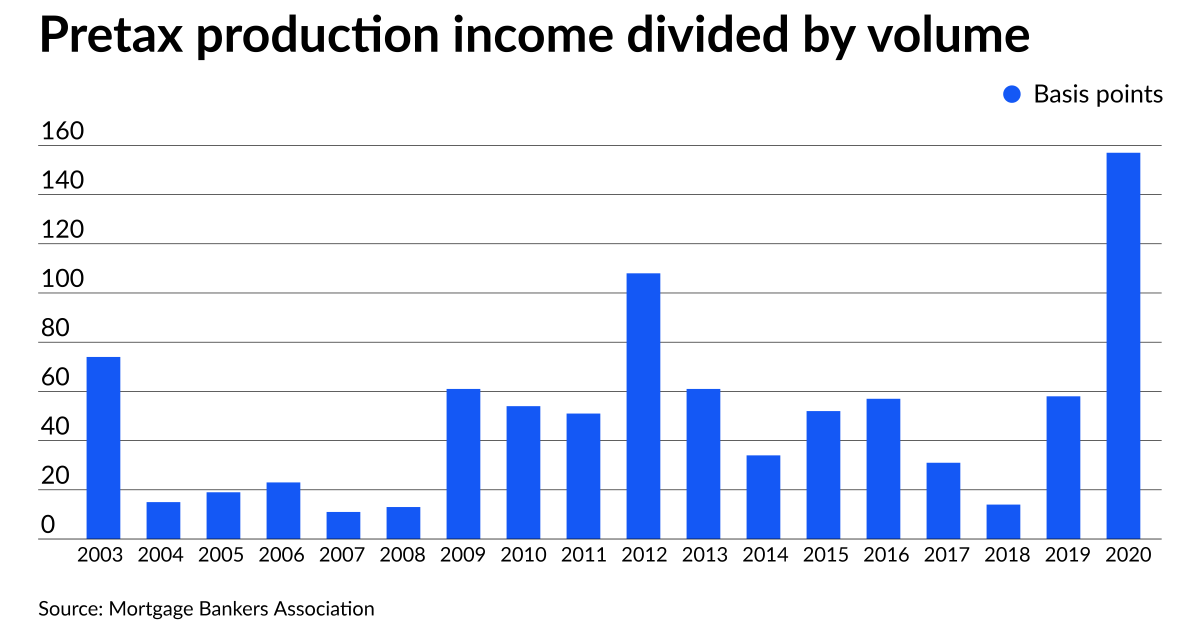 As early as 2016, this author wrote a number of research papers and reports examining the differences between depositaries and financial firms in terms of the sources and uses of capital. These efforts responded to a dangerous trend in the public policy debate about independent mortgage lenders, which focused on concepts and benchmarks that were more appropriate for commercial banks.

Financial firms are, after all, part of the private sector, while banks are government-sponsored entities that enjoy numerous public subsidies and the Federal Reserve Board’s monopoly protection over the US payments system. If you are not an insured custodian, then you are a customer of a bank.

Non-banks rely on banks for financing. This group includes all IMBs and of course Fannie Mae and Freddie Mac. The fundamental economic difference between banks and non-banks shapes the conversation that starts with the question: How much capital does a non-bank mortgage company need?

Banks hold capital as a source of their strength, if for no other reason than lowering the settlement costs for the FDIC’s bank insurance fund. Banks have capital to absorb credit losses. On the other hand, non-bank financial firms have working capital that is correlated with interest rate movements. The Mortgage Bankers Association graph below shows pre-tax production income divided by the volume of credit in basis points.

IMBs are unable to absorb significant losses. Correctly understood, IMBs are sales networks that often buy rather than grant loans and then sell those loans to investors. IMBs enable an ecosystem of correspondents and wholesale brokers with one purpose only to extend loans and sell them on the secondary market as quickly as possible. Banks are about preserving capital; non-banks are about maximizing asset turnover.

It is no coincidence that commercial banks like Western Alliance Bancorp (NYSE: WAL), which acquired the hyper-efficient aggregator AmeriHome, or American Express (NYSE: AXP) are trading the stock markets at a premium to other banks. Why? Because the DNA of financial companies flows through their veins. These banks maximize the turnover of assets and thus the capital employed and generate above-average returns on equity.

Most commercial banks, on the other hand, are deliberately made dysfunctional through regulations in order to avoid risks and, in particular, the risk of direct confrontation with consumers. Commercial banks have fled direct exposure to the Federal Housing Administration, Veterans Affairs, and Department of Agriculture markets for the past decade, but have also increased wholesale exposure to IMBs through inventory and prepayment.

The banks’ lines of credit to IMBs are fully backed by federal, conventional or private loans, but isolate the bank from consumers, who are rightly considered toxic in terms of reputational risk. Commercial lending is better business for banks, a fact that has been reinforced by regulators since the 2008 financial crisis.

For their part, IMBs are far more operationally efficient than banks and better able to service one to four family loans without conflicting with state or federal regulators. A decade since the 2008 crisis, the partnership between commercial banks and IMBs appears to be in balance. Banks provide finance for the wholesale mortgage finance business, and IMBs issue and service the loans. In fact, IMBs often sell loans to commercial banks.

In recent years, first the Financial Stability Oversight Council, then the Federal Housing Finance Agency, and then the Conference of State Bank Supervisors have threatened IMBs with ill-informed bank capital requirements. These rules, including those for the GSEs themselves, ignore the large economic and financial differences between a bank and a finance company.

Note to all of the above: if regulation doesn’t work economically, it probably won’t work as public policy either.

Most recently, Ginnie Mae threatened IMBs with new licensing requirements that would severely limit debt and profitability in the government loan market. This change will decimate government lenders and significantly reduce the value of the mortgage servicing assets. I addressed this suggestion in a recent blog post on The Institutional Risk Analyst.

The question of the Ginnie Mae Rule, as well as the possible capital rule for conventional issuers coming from the FHFA, is: How much capital does a mortgage bank really need?

Most IMBs actually work with negative net working capital, especially the shops with high asset turns. Banks provide this capital in the form of secured and unsecured liabilities. Since the goal of IMBs is to make and sell loans, including loans taken from their servicing book, IMBs do not want or need to build excess capital. And the stock markets are not interested in providing the IMBs or even the GSEs with bank-like capital.

IMBs have some long-term liabilities, but the operational ability to make and service loans profitably and the financial ability to maintain mortgage servicing rights are the two key characteristics of a successful mortgage lender.

As an IMB’s servicing book grows, more and more business can be generated in-house, which greatly improves the issuer’s return on equity and the stability of the business. A large maintenance book is good for IMBs.

For regulators, the most important rating for IMBs regarding liquidity must be a simple net worth test, more similar to that used by the SEC and FINRA for broker-dealers than for commercial banks. The IMB must have sufficient net capital to support its loan book and MSRs, including funding timely interest payments to bondholders. Storage lines and, in particular, term debts should be offset against the coverage of liquidity requirements.

An important aspect of this analysis for both Ginnie Mae and FHFA should be how much of the servicing rights the IMB retains. Servicing a distressed loan costs a few basis points, but servicing a distressed loan can cost more than the service fee and can last for months. It is critically important to ensure that IMBs retain sufficient portions of the servicing strip to cover operating or credit costs incurred as part of loss mitigation.

Instead of trying to impose banking capital requirements on financial firms, FHFA and Ginnie Mae regulators should instead take steps to maintain a minimum level of liquidity. As early as November 2018, before the sudden departure of Ginnie Mae President Michael Bright, the agency issued a new rule for participants (APM 18-07), according to which IMBs are obliged to report sales of investments or entire MSRs to investors.

“To promote stability and liquidity in the secondary market, Ginnie Mae is introducing a number of updates to its counterparty risk management framework to strengthen issuers’ financial resilience,” announced Ginnie Mae. The program has not been publicly heard since then, but it remains an important submission for Ginnie Mae and the FHFA to consider improvement.

Both FHFA and Ginnie Mae would be well served if they put the banks’ draconian capital rules aside and instead focused on a simple regime of capital and liquidity that allows IMBs to loan and sell. One more note to regulators: when profitability goes down, so does IMF capital, making access to bank credit and bond markets critical. Don’t set static capital levels for IMBs knowing the tide is going down. Call Federal Reserve Chairman Jay Powell with questions.

By focusing on important things like maximizing operational efficiency and profitability, and overseeing the sale of servicing income to investors, regulators can ensure a robust non-bank market for lending and service, and also protect the commercial banks that support the mortgage financing market. But don’t try to pretend IMBs or even the GSEs are commercial banks. This is a stupid assignment that will end in tears.

How to save on car insurance during the coronavirus pandemic

The new international private bank of the Germans emphasizes the…

Looking to an energy efficient future