Are you thinking about switching to solar energy? Read this first! 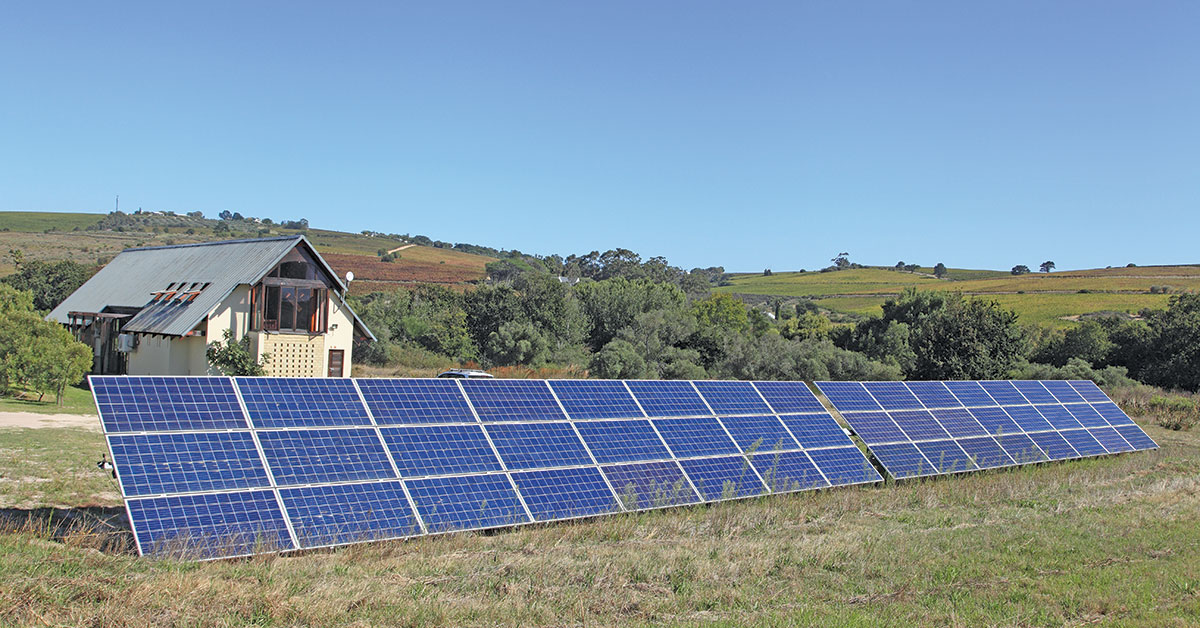 A single-axis (RenEnergy3) solar tracker in the RenEnergy office on the outskirts of Stellenbosch. Photo: Glenneis Kriel

In the past, South Africa was considered to be one of the cheapest countries for electricity, but prices rose more than 177% between 2010 and 2020. The escalation has left most businesses in a profit squeeze, with power outages and interrupted supplies adding to this financial burden.

RenEnergy, a UK provider of solar power solutions, expanded to South Africa in 2012.

“But interest in South Africa, while its solar energy potential is among the best in the world, only really picked up four years ago as the technology became cheaper and more competitive compared to Eskom prices and the burden was thrown off.” Supply unreliable. “

The business environment was also unfriendly to alternative energies, with legislation and finance previously being the biggest constraints.

“Eskom just wasn’t up to it and had to reverse engineer it to accommodate on-grid systems while traditional banking institutions were unable to easily fund these types of assets.”

The situation has now improved dramatically as new rules were introduced in October 2020 that allow municipalities to generate or purchase their own electricity. Eskom also accepted that it had to allow private producers to export surplus energy into Eskom’s grid in order to address supply bottlenecks.

On the financing side, many banks are now viewing renewable energies as added value and employing specialist bankers to accommodate companies and homeowners who want to switch, says Peters.

In his opinion, RenEnergy’s competitive advantage lies in the quality of its services and components.

“The manufacturers of solar modules are classified internationally in stages. We only use components from Tier 1 manufacturers, regardless of their origin, as this level is reserved for large publicly traded brands with a good reputation for quality and performance and we know they will be there tomorrow. “

The solutions are obtained from different manufacturers, depending on the costs and the individual requirements of an installation, for example whether the installation area is particularly dusty or hot.

One of the challenges with a solar system is that it works noiselessly, which makes it difficult to spot problems and inefficiencies, unlike wind turbines, which may no longer run. RenEnergy addresses this problem by remotely monitoring the energy output of its customers’ systems.

“Our ultimate goal is to become a small utility company, almost like a mini-eskom but much more efficient, with mini-grid infrastructure combined with turnkey maintenance and repair services for our customers (from municipalities to factories and agricultural Operated) when and where it is needed, ”says Peters.

Since its inception in South Africa, RenEnergy has designed, built and serviced more than 130 solar systems on farms, in packhouses, in processing and manufacturing plants and elsewhere. Of these, around 105 are monitored remotely.

Considerations
What should a farmer consider when deciding on solar energy? First, Peters explains, solar is not an isolated solution, as it can only generate energy when the sun is shining.

It should therefore be combined with other energy sources such as Eskom electricity or a generator, or stored in a battery bank to help the user at night and on cloudy days.

Energy storage used to be exorbitant. However, batteries have steadily become more advanced and affordable. A 60kWh LiFePO4 (lithium iron phosphate) energy storage device, which was sold for over R480,000 three years ago, can now be bought for around R290,000, according to Peters.

Second, a thorough understanding of the cyclical and seasonal energy use on the site is required to determine the size of the system.

“Ideally, RenEnergy needs energy consumption data of at least one year in order to determine the capacity of the system that is most suitable for the respective situation,” explains Peters.

“The system should not be based on peak demand, as some packing houses, for example, only operate three months a year. The goal is a cost-effective balance between peaks and troughs in the energy cycle. “

Third, farmers should ideally be as energy efficient as possible when converting.

“Do an energy audit and see how you can improve your energy efficiency. This can range from small changes in behavior to the installation of speed-controlled pumps, lights that are switched on or off via motion sensors, the use of curtains in cooling areas or natural light. Operations that used to take place at night may have to be shifted to the daytime in order to optimize the use of solar energy. “

The future
Peters assumes that due to the increased pressure on the national energy supplier, more solar systems will be connected to the Eskom network in the future.

Far ahead is the Western Cape, which is the only province that has so far been able to feed back into the grid and receive credit for stored energy. According to Peters, Eskom is following suit as it is becoming more competent in dealing with this administrative burden and more communities are able to offer this service.

He points out that in the past eight months, RenEnergy has submitted many energy banking applications to Eskom to be fed into the grid, but none of them have yet been approved.

“The system may be moving slowly, but in general there are positive developments for the industry.” Companies wishing to install systems greater than 1,000 kW (1 MW) require a generation license issued by the National Energy Regulator of South Africa.

“It’s a shame for me. The government will be able to resolve our energy crisis much faster if large companies could generate as much energy as their infrastructure allows. Instead, the state takes the route of large-scale systems, which entails the laborious approval of suppliers and locations with expensive network connections and large energy losses, as these are far away from the consumers, “says Peters.

It will also take some time before farmers or agribusinesses can generate carbon credits by adopting green energy sources. “

The idea of ​​emission certificates is noble and definitely the trend of the world, but at the moment it is still difficult to implement. “

Nevertheless, CO2 neutrality is becoming more and more important for consumers overseas, and Peters assumes that the use of alternative energies can be used as a trump card for opening up and opening up new markets in the future.

Cost comparison
Comparing prices is difficult as every situation is unique. However, Peters points out that the new systems with improved power banks usually pay for themselves within three to nine years.

A big advantage of solar energy systems is that they are modular, which means that new additions can be made over time if necessary.

“It is very important to first determine the final energetic goal and then the steps to get there. You don’t have to implement a Rolls-Royce system to start with. Better to design and implement smaller steps, but the right steps, ”says Peters.

Go solar
After getting tired of the high cost and unreliability of Eskom electricity, the Western Cape farm owner, DC Fourie, decided to go offline with a solar power system.

“My farm Koppies, near Riviersonderend, is right at the end of a power line, so I often had problems with wind damage, which resulted in long periods without an energy supply. In addition, I paid more than R3 500 a month just to rent the line, ”he says.

Fourie rents his 514 hectares of farmland to another farmer and therefore only needs electricity for the farmhouse where he lives with his wife and two daughters. After seeing the solar system that RenEnergy had supplied to the Dassiesfontein stable near Caledon five years ago, he decided to have one installed.

“Finding a supplier was probably the hardest part of the journey as everyone seemed to become an expert when I started my search. The price fluctuations were also overwhelming, ”he says.

The Dassiesfontein owner, however, was satisfied with his system and Fourie chose RenEnergy.

“They may be more expensive, but the service and quality more than make up for it. The least qualified person working on the facility was likely the electrician as so much care was taken to set up the facility correctly. “

“I told them directly that we weren’t trying to be more energy efficient, and I don’t plan on fancy buying new equipment to reduce our energy consumption until our existing equipment breaks. We’ve since installed a gas shower and stove, ”says Fourie.

He bought the 8.4 kWh system with an advanced lithium-ion battery. “I chose the most expensive battery to make sure we had enough energy on winter days. At that time it cost around 420,000 ren. “

A generator serves as a backup when the sky is overcast for more than three or four days.

Fourie thought it would take seven and a half years for the investment to pay off, but he did that in five years.

“Going off the grid with solar energy required a clear change in awareness and good planning. For example, we don’t plan a Sunday roast without looking at the weather forecast, ”he says.

Retief van den Berg, who grows apples on his Ladybird farm near Grabouw in the Western Cape, bought a 6kWh system four and a half years ago and a year later another of the same size.

His plan for the future is to save energy in a battery system.

“Batteries were very expensive when I installed my on-grid system. However, we have so many power outages in Grabouw due to load shedding and theft that I am now planning to install an energy storage system with RenEnergy. The excess energy is then no longer throttled, but stored in the new energy bank, which is used in the event of failures. “

AI in insurance market growth in 2030