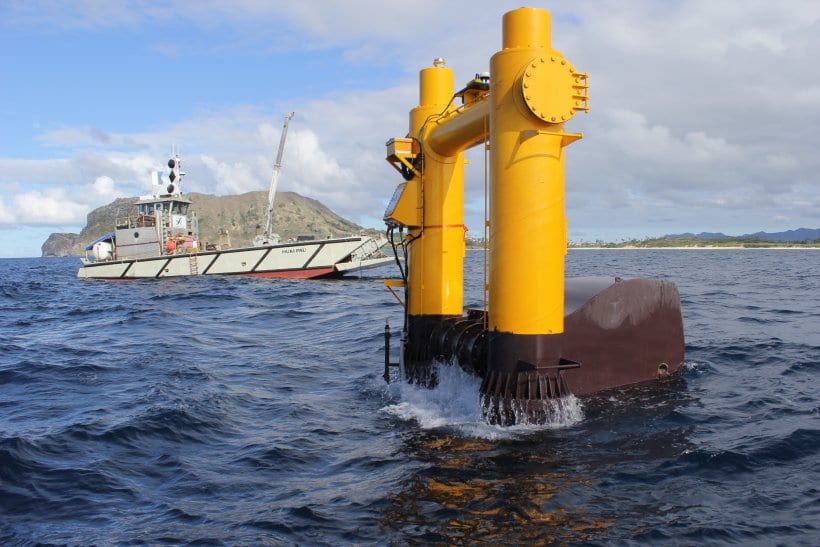 The U.S. Department of Energy (DOE) has announced that it will provide up to $ 27 million in federal funding for research and development projects aimed at advancing the efficient conversion of wave energy to electricity with the goal of making the technology commercially viable.

The DOE said on July 7 that the money will support the Biden government’s efforts to “build a clean energy economy,” along with the president’s goal of net-zero carbon emissions from the electricity sector by 2050.

The agency said Wednesday that projects selected for funding will conduct their research at the PacWave South facility off the Oregon coast near Newport. Construction of PacWave South, supported among other things by grants from the DOE and the state of Oregon, began in June. Officials expect the site to be operational by 2023.

The DOE has supported wave energy projects for several years, including a project in Hawaii with an Azura wave energy converter. The Azura WEC will be installed on a US Navy test site. Courtesy: DOE and Northwest Energy Innovations.

“Oregon is helping to lead the nation in our efforts to harness the unlimited energy potential in America’s oceans and lakes,” said Energy Secretary Jennifer Granholm on Wednesday. “With wave energy, we have the ability to feed more renewable energy into the grid and provide more sustainable energy in hard-to-reach communities. DOE’s investments in American companies and universities developing these new technologies will fuel our clean energy future. ”

Wave energy is a form of ocean energy that is trapped when wind blows across the surface of open water in oceans and lakes. A wave energy converter (WEC) is required to convert the captured energy into electricity.

Wave energy technologies are being studied by other countries, including Europe. The UK announced in March that it would use £ 7.5 million ($ 10.37 million) in public funds to support the development of eight wave energy projects, with research and development being led by UK educational institutions.

SIMEC Atlantis Energy announced in April that it would seek support from the UK government for an expansion of what is known as the world’s largest tidal energy project, the MeyGen installation off the north coast of Scotland.

Ocean Energy Europe announced in early 2021 that around 260 kW of tidal power capacity had been added in Europe last year, with 200 kW of wave power being installed. The group said last month there were “more than enough marine energy projects in the works” to meet the European Offshore Renewable Energy Strategy target of 100 MW installed capacity by 2025. The group said there were “17 major projects … already in the works, covering over 160 MW of clean energy and € 1.2 billion [$1.42 billion] of investments. “

Testing marine energy technologies in the open ocean has been challenging due to licensing issues and the lack of available test sites. The DOE in 2016 partnered with Oregon State University to build PacWave South, which the agency said was “the first accredited, on-grid, pre-approved open-water wave energy test facility in the country.”

The Funding Opportunities Announcement (FOA) on Wednesday is for testing and R&D activities in the Advancing Wave Energy Technologies through Open Water Testing at PacWave program. It will support the first round of projects at PacWave South.

Check out this video of the Azura Wave Energy device in action off the Hawaiian coast.

The work carried out within the framework of this FOA “will also generate open access data that will benefit the entire WEC research and development community,” the DOE announced. The agency said the data will include wave, wind and ocean current resource measurements, geotechnical measurements and environmental monitoring measurements, “which will help improve future WEC system designs for PacWave and reduce the cost of future deployments.”

“The ocean covers more than 70% of the surface of our planet, and we can capture the power of its waves, currents, and tides to power our homes, buildings, and communities,” said Suzanne Bonamici, an Oregon representative -House. “In our transition to a 100% clean energy economy, ocean energy has enormous potential as one of the last untapped renewable energy sources. Federal investment will help set them free. This funding for research, development and demonstration efforts at the PacWave test facility will catalyze this promising industry and build on the innovation of Oregon state researchers and Oregon employers. “

PacWave South’s research deals with technologies and processes for converting wave energy into electricity more efficiently and with the integration of such renewable energies into the grid. Other “blue economy” markets are also examined. The DOE specifically said the funding will support projects that focus on:

Testing WEC Technologies at PacWave (up to $ 15 million in federal funding): This subject area focuses on testing wind turbine system designs for remote and microgrid applications, as well as open source WEC systems that aim to generate publicly available data and knowledge that will benefit the entire wind turbine industry.

Advancing WEC Designs for PacWave (up to $ 5 million in federal funding): This area will support the development of robust wind turbine designs to generate off-grid or grid-connected electricity. At the end of the award period, the developed systems would be ready for production, use and prototype tests at PacWave South.

Open Topic: Research and Development in Wave Energy at PacWave (up to US $ 7 million in federal funds): This area will directly use the PacWave test facility to conduct powerful research and development in wave energy that will advance the marine energy industry as a whole. This thematic area will support projects that advance WEC systems, system components, environmental monitoring technologies, instrumentation and predictive health monitoring systems, shaft measurement systems, and other assistive technologies.

The DOE said the concept papers for the FOA are due August 13th and full applications are due October 5th. An information webinar will take place on July 22nd; Full details of the announcement can be found on this DOE website.

Martin Lewis: A warning to anyone with a mortgage

Why I disagree with Elon Musk’s voice prediction – News

Do the energy sector and “ERX” still have room to run?