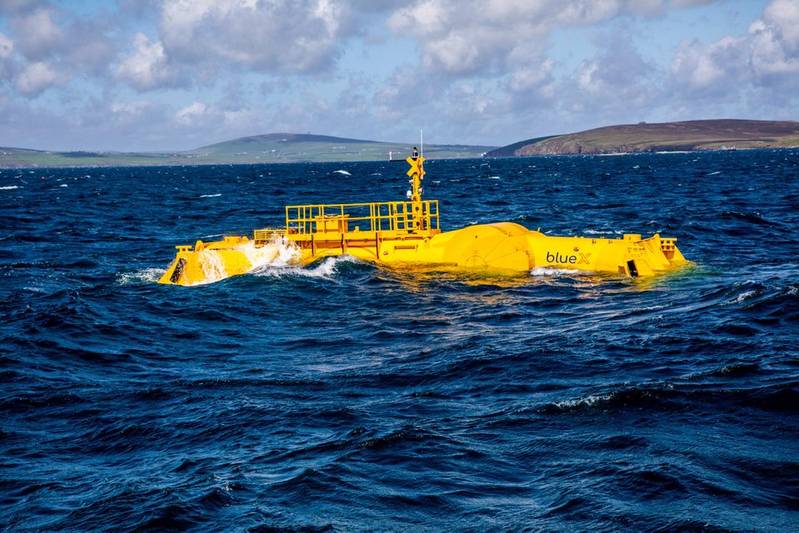 Mocean Energy announced Monday that it has started testing its Blue-X wave energy prototype at the European Marine Energy Center (EMEC) in Orkney, Scotland, with the device currently generating electricity.

“In the past few days, the 20-meter-long, 38-tonne wave machine has been towed from Kirkwall to EMEC’s ​​Scapa Flow test site, where it has been successfully moored and put into service for initial test drives,” the company said.

Later that summer, the Blue X device will be relocated to EMEC’s ​​grid-connected wave testing facility in Billia Croo on the west coast of Orkney, where it will be put through its paces under more demanding full-sea conditions.

Managing Director of Mocean Energy Cameron Mcnatt said: “This is a very exciting moment as we are testing our first prototype at sea. After a successful installation on Friday, Blue X generated its first electricity and produced electricity throughout the weekend to charge batteries.

“In the Scapa test phase, we will test the electricity production, compare the results with our numerical predictions and test the operation including towing, installation, removal and access at sea. The device is standalone and operated wirelessly. A 4G connection allows us to send commands and download data from the land.

He said the company believes its Blue-X technology is ideally suited for a range of offshore operations where it can make a direct contribution to net-zero goals.

“In the longer term, we believe that grid-scale machines will be able to tap into deep ocean waves to generate significant amounts of clean energy,” he said.

In the next year, there are plans to connect the device to an underwater battery that will power a remotely controlled autonomous underwater vehicle (AUV) – with possible applications at sea. The deployment and demonstration of the Blue X at EMEC is funded by Wave Energy Scotland and supported by Interreg North-West Europe’s Ocean DEMO project.

Blue X’s manufacturing and testing program is supported with £ 3.3 million from Wave Energy Scotland (WES) through its Novel Wave Energy Converter program. Earlier this year, Mocean Energy announced a £ 1.6 million project with OGTC, oil company Chrysaor (now re-established Harbor Energy), and underwater specialists EC-OG and Modus to explore the potential of the Blue X prototype to power a Underwater battery and a remote control to demonstrate underwater vehicle – with onshore tests in the facility of EC-OG in Aberdeen.

US $ 24M Cash Settlement Completed for Licenseholders in Talisman…

The pet non-life insurance market is booming around the world