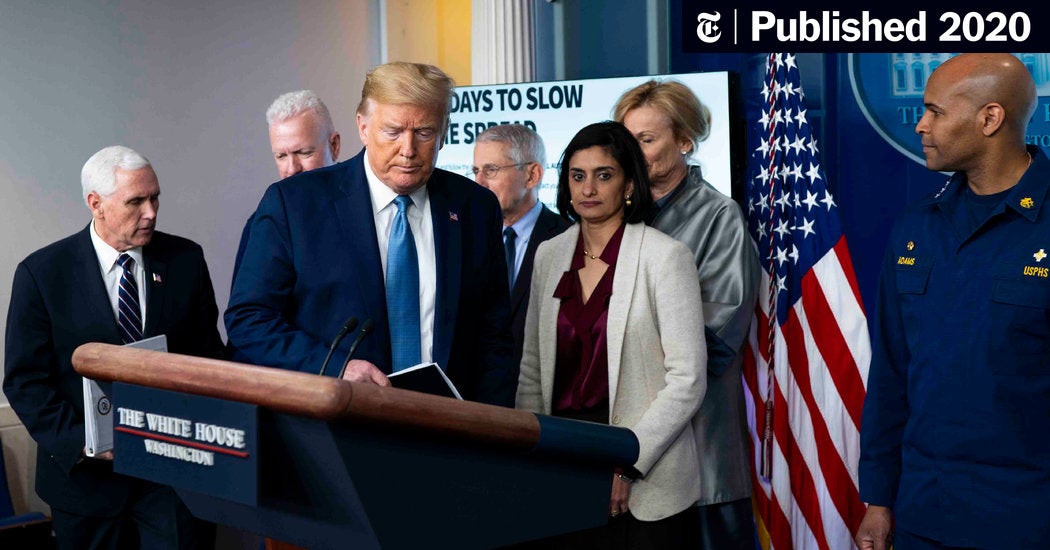 (Would you like to receive this briefing by email? Here is the registration.)

We cover the growing restrictions the coronavirus pandemic and look forward to Democratic primary election in three states. (Ohio postponed its election because of the outbreak.)

Americans should stop unnecessary travel and avoid gathering in groups of more than 10 people, the president said Monday as he warned that the coronavirus outbreak could last well into summer.

The US economy is starting to close

As the pandemic slows consumer activity, business groups, local and state leaders, and a growing chorus of lawmakers and economists are calling on the federal government to pay workers to stay home and channel money to struggling businesses.

The main airline trading group has suggested that a $ 50 billion bailout could be needed for airlines. President Trump’s chief economist Larry Kudlow said Monday he did not expect the industry to need a bailout, but that the government would do what it can.

Global markets were mixed today after the S&P 500 fell 12 percent, its worst daily decline since 1987. Here is the latest.

Connected: China’s economy may have contracted for the first time since 1976 in the first quarter, a ominous sign for the rest of the world.

Go deeper: In the $ 87 trillion global economy, one person’s expenses are another person’s income. That simple idea explains the threat posed by the pandemic, writes our senior business correspondent.

Watch closer: Our reporters looked at how enforced closings are affecting restaurants in New York and Paris.

Connected: As millions work and study from home, Internet networks are being tested.

Vote in the shadow of the outbreak

The Democratic President’s race moves to Arizona, Florida and Illinois today, the first primaries to be held under tightened restrictions for the coronavirus.

Ohio was due to vote today too, but its governor, Mike DeWine, said Monday that he and state health officials would ignore a court ruling and postpone the primary by declaring a public health emergency.

Connected: The outbreak could affect voter turnout less than expected, as millions have already cast their votes, particularly in Arizona and Florida.

Watch closer: Under heavy pressure to score victories, Senator Bernie Sanders’ campaign seeks to reconcile a sense of resignation with a desire to move on.

If you have 6 minutes, it’s worth it

And you thought baseball was bad.

Our sports reporter David Waldstein writes: “Whether it’s a secret buzzer planted in a shoe, a smartphone that was smuggled into the bathroom, a certain yoghurt flavor that is delivered at a certain time – or just online – Players using computerized chess programs – chess may have more cheats than any other game in the world. “

Mueller’s indictment can be dismissed: The Justice Department has dropped charges against two Russian Shell companies accused of having funding plans to meddle in the 2016 presidential election. The companies were indicted in a 2018 indictment secured by Special Adviser Robert Mueller.

Short return in Syria: Amid a ceasefire in the northern province of Idlib, some of the hundreds of thousands of displaced people are trickling back. But few, if any, say they believe the silence will last.

Snapshot: A physicist tries to untangle the structural dynamics of bird nests using bamboo skewers at the top. A nest is “a disordered stick bomb” that is resilient in ways that humans have barely begun to understand.

Late night comedy: The shows stopped production during the coronavirus outbreak. Our summary will go on when they do.

What we read: This New York Magazine article about the fatal stabbing of a student in a Manhattan park. Jonathan Wolfe, a news producer on The Daily, called it “an insightful look at how the communities that surround the park – and the city as a whole – have responded.”

Now a break from the news

Cook from your pantry: Our columnist Melissa Clark offers weekly recipe tips for those of us trying to make the most of food supplies. First: pumpkin bread.

Clock: Are you looking for a few hours of distraction between vigorous hand washing? A musical mockumentary, two true crime docs and a pottery competition are among the nine TV shows we recommend.

Read: Was there a murder on the Mayflower? In her new novel Beheld, TaraShea Nesbit uses a death on the pilgrim ship to investigate what life was like for women in the Plymouth Colony.

And now for the background story about …

To ease the recent turmoil on Wall Street, Times Insider spoke to Matt Phillips, a reporter at the business desk. Below is a condensed version of the conversation.

Join us last week. What happened?

Everyone knew the virus was spreading in China and shared it. But there was a psychological shift as the virus spread to Italy. Many Wall Street workers were in Italy. This wasn’t as “strange” as people thought.

Then there was growing concern about our government’s response. Wall Street is not warm and hazy. What they really want to see are numbers. And if there aren’t numbers to work with, Wall Street doesn’t know what to do. The fact that there hasn’t been any significant testing in the US has driven the streets crazy.

Were you surprised by the stock market events of the past week?

I never would have predicted a breakdown like we saw last week. This was the end of the bull market, in part because the Federal Reserve, which has been a big wind in the market for a decade, can’t solve it: it can’t print enough money to make sure people don’t get infected.

How did your sources react?

They say it’s scary. People in the stock market usually speak in general because details are valuable. My job is like trying to measure their temperature for what they think is driving the market, but no one really has a clue. It really is the sum of millions of people with millions of motivations taking millions of positions so there is never an answer.

That’s it for this briefing. Until next time.

Many Thanks
Mark Josephson and Eleanor Stanford took the break from the news. You can reach the team at [email protected]

PS
• We listen to “The Daily”. Today’s episode is about the coronavirus in Italy.
• Here is today’s mini crossword puzzle and a clue: copper + zinc (five letters). You can find all of our puzzles here.
• Elaine Glusac, a longtime contributor to the Times’ Travel Section, is our next frugal traveler columnist.

Opinion: How a wealth tax would work in the United States